Oh, that place. It’s so crowded nobody goes there anymore.

If 2020 has given the world a phrase then that phrase is social distancing. However, it put me in mind of a classic analysis in economics/ complexity theory, the El Farol Bar problem.

I have long enjoyed running in Hyde Park. With social distancing I am aware that I need to time and route my runs to avoid crowds. The park is, legitimately, popular and a lot of people live within reasonable walking distance. Private gardens are at a premium in this part of West London. The pleasing thing is that people in general seem to have spread out their visits and the park tends not to get too busy, weather depending. It is almost as though the populace had some means of co-ordinating their visits. That said, I can assure you that I don’t phone up the several hundred thousand people who must live in the park’s catchment area.

The same applies to supermarket visits. Things seem to have stabilised. This put me in mind of W B Arthur’s 1994 speculative analysis of attendances at his local El Farol bar.1 The bar was popular but generally seemed to be attended by a comfortable number of people, neither unpleasantly over crowded nor un-atmospherically quiet. This seems odd. Individual attendees had no obvious way of communicating or coordinating. If people, in general, believed that it would be over crowded then, pace Yogi Berra, nobody would go, thwarting their own expectations. But if there was a general belief it would be empty then everybody would go, again guaranteeing that their own individual forecasts were refuted.

Arthur asked himself how, given this analysis, people seemed to be so good at turning up in the right numbers. Individuals must have some way of predicting the attendance even though that barely seemed possible with the great number of independently acting people.

The model that Artur came up with was to endow every individual with an ecology of prediction formulas or rules, each taking the experience base and following a simple rule, using it to make a prediction of attendance the following week. Some of Arthur’s examples were, along with some others:

Now, every time an individual gets another week’s data he assesses the accuracy of the respective rules. He then adopts the currently most accurate rule to predict next week’s attendance. 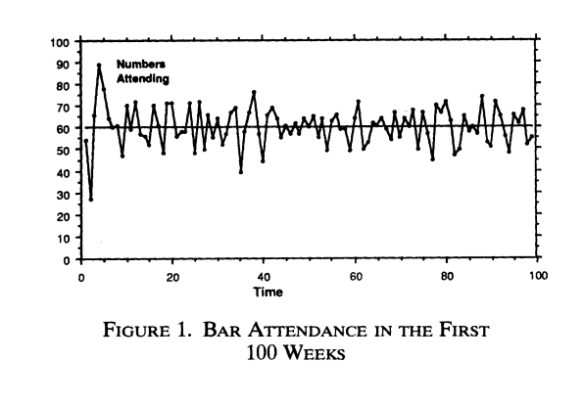 There are a few points to pull out of that about human learning in general. What Arthur showed is that individuals, and communities thereof, have the ability to learn in an ill-defined environment in an unstructured way. Arthur was not suggesting that individuals co-ordinate by self-consciously articulating their theories and systematically updating on new data. He was suggesting the sort of unconscious and implicit decision mechanism that may inhabit the windmills of our respective minds. Mathematician and philosopher Alfred North Whitehead believed that much of society’s “knowledge” was tied up in such culturally embedded and unarticulated algorithms.2

It is a profoundly erroneous truism, repeated by all copy-books and by eminent people when they are making speeches, that we should cultivate the habit of thinking of what we are doing. The precise opposite is the case. Civilization advances by extending the number of important operations which we can perform without thinking about them. Operations of thought are like cavalry charges in a battle — they are strictly limited in number, they require fresh horses, and must only be made at decisive moments.

Psychologists Gary Klein and Daniel Kahneman investigated how firefighters were able to perform so successfully in assessing a fire scene and making rapid, safety critical decisions. Lives of the public and of other firefighters were at stake. Together, Klein and Kahneman set out to describe how the brain could build up reliable memories that would be activated in the future, even in the agony of the moment. They came to the conclusion that there are two fundamental conditions for a human to acquire a predictive skill.3

Arthur’s Fig.1, after the initial transient, looks impressively regular, stable and predictable. Some “invisible hand” has moved over the potential attendees and coordinated their actions. So it seems.

Though there is some fluctuation it is of a regular sort, what statisticians call exchangeable variation.

The power of a regular and predictable process is that it does enable us to keep Whitehead’s cavalry in reserve for what Kahneman called System 2 thinking, the reflective analytical dissection of a problem. It is the regularity that allows System 1 thinking where we can rely on heuristics, habits and inherited prejudices, the experience base.

The fascinating thing about the El Farol problem is that the regularity arises, not from anything consistent, but from data-adaptive selection from the ecology of rules. It is not obvious in advance that such can give rise to any, even apparent, stability. But there is a stability, and an individual can rely upon it to some extent. Certainly as far as a decision to spend a sociable evening is concerned. However, therein lies its trap.

Tastes in venue, rival attractions, new illnesses flooding the human race (pace Gottfried Leibniz), economic crises, … . Sundry matters can upset the regular and predictable system of attendance. And they will not be signalled in advance in the experience base.

Predicting on the basis of a robustly measured, regular and stable experience base will always be a hostage to emerging events. Agility in the face of emerging data-signals is essential. But understanding the vulnerabilities of current data patterns is important too. In risk analysis, understanding which historically stable processes are sensitive to foreseeable crises is essential.

Folk physics is the name given to the patterns of behaviour that we all exhibit that enable us to catch projectiles, score “double tops” on the dart board, and which enabled Michel Platini to defy the wall with his free kicks. It is not the academic physics of Sir Isaac Newton which we learn in courses on theoretical mechanics and which enables the engineering of our most ambitious monumental structures. However, it works for us in everyday life, lifting boxes and pushing buggies.4

Apes, despite their apparently impressive ability to use tools, it turns out, have no internal dynamic models or physical theories at all. They are unable to predict in novel situations. They have no System 2 thinking. They rely on simple granular rules and heuristics, learned by observation and embedded by successful repetition. It seems more than likely that, in many circumstances, as advanced by Whitehead, that is true of humans too.5 Much of our superficially sophisticated behaviour is more habit than calculation, though habit in which is embedded genuine knowledge about our environment and successful strategies of value creation.6 Kahneman’s System 1 thinking.

The lesson of that is to respect what works. But where the experience base looks like the result of an pragmatic adjustment to external circumstances, indulge in trenchant criticism of historical data. And remain agile.

Next time I go out for a run, I’m going to check the weather.