The latest UK rail safety statistics were published in September 2016, again absent much of the press press fanfare we had seen in the past. Apologies for the long delay but the day job has been busy. Regular readers of this blog will know that I have followed the suicide data series, and the press response, closely in 2015, 2014, 2013 and 2012. Again, I “Cast a cold eye/ On life, on death.” Again I have re-plotted the data myself on a Shewhart chart.

Readers should note the following about the chart.

The current chart shows two signals, an observation above the upper NPL in 2015 and a run of 8 below the centre line from 2002 to 2009. As I always remark, the Terry Weight rule says that a signal gives us license to interpret the ups and downs on the chart. So I shall have a go at doing that. Last year I was coming to the conclusion that the data increasingly looked like a gradual upward trend. Has the 2016 data changed that?

The Samaritans posted on their website, “Rail suicides fall by 12%,” and went on to say:

Suicide prevention measures put in place as part of the partnership between Samaritans, Network Rail and the wider rail industry are saving more lives on the railways.

In fairness, the Samaritans qualified their headline with the following footnote.

We must be mindful that suicide data is best understood by looking at trends over longer periods of time, and year-on-year fluctuations may not be indicative of longer term trends. It is however very encouraging to see such a decrease which we would hope to see continuing in future years.

The Huffington Post, no, not sure I really think of them as part of the MSM, were less cautious in banking the 12% by stating, “It is the first time the number has dropped in three years.” True, but #executivetimeseries!

What shall we make of the decrease, a decrease to  “back within” the NPLs? First, the mere fact that there are fewer suicides is good news. That is a “better” outcome. The question still remains as to whether we are making progress in reducing the frequency of suicides. Has there been a change to the underlying cause system that drives the suicide numbers? We might just be observing noise unrelated to an underlying signal or trend. Remember that extremely high measurements are usually followed by lower ones because of the principle of regression to the mean.1 Such a decrease is no evidence of an underlying improvement but merely a deceptive characteristic of common cause variation.

One thing that I can do is to try to fit a trend line through the data and to ask which narrative best fits what I observe, a continuing increasing trend or a trend that has plateaued or even reversed. As you know, I am very critical of the uncritical casting of regression lines on data plots. However, this time I have a definite purpose in mind. Here is the data with a fitted linear regression line. 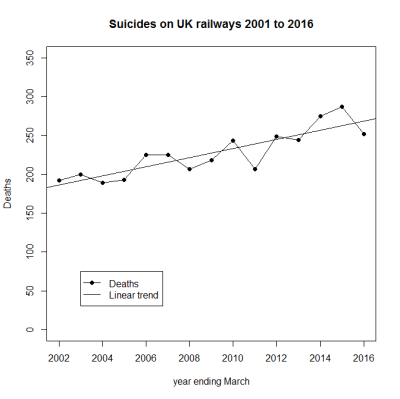 What I wanted to do was to split the data into two parts:

The question I want to ask is whether the residual variation is stable, just plain noise, or whether there is a signal there that might give me a clue that a linear trend does not hold. The way that I do that is to plot the residuals on a Shewhart chart.

My opinion is that, when I plot the data that way, I have a compelling picture of a growing trend about which there is some stable common cause variation. Had there been an observation below the lower NPL on the last chart then that could have been evidence that the trend was slowing or even reversing. But not here.

I note that there’s also a report here from Anna Taylor and her colleagues at the University of Bristol. They too find an increasing trend with no signal of amelioration. They have used a different approach from mine and the fact that we have both got to the same broad result should reinforce confidence in out common conclusion.

Of course, we should not draw any conclusions from the data without thinking about the measurement system. In this case there is a legal issue. It concerns the standard of proof that the law requires coroners to apply before finding suicide as the cause of death. Findings of fact in inquests in England and Wales are generally made if they satisfy the civil standard of proof, the balance of probabilities. However, a finding of suicide can only be returned if such a conclusion satisfies the higher standard of beyond reasonable doubt, the typical criminal standard.2 There have long been suggestions that that leads to under reporting of suicides.3 The Matthew Elvidge Trust is currently campaigning for the general civil standard of balance of probabilities to be adopted.4

Previously I noted proposals to repeat a strategy from Japan of bathing railway platforms with blue light. In the UK, I understand that such lights were installed at Gatwick in summer 2014 but I have not seen any data or heard anything more about it.

A huge amount of sincere endeavour has gone into this issue but further efforts have to be against the background that there is an escalating and unexplained problem.