I visited my GP (family physician) last week on a minor matter which I am glad to say is now cleared up totally. However, the receptionist was very eager to point out that I had not taken up my earlier invitation to a cardiovascular assessment. I suspect there was some financial incentive for the practice. I responded that I was uninterested. I knew the general lifestyle advice being handed out and how I felt about it. However, she insisted and it seemed she would never book me in for my substantive complaint unless I agreed. So I agreed.

I had my blood pressure measured (ok), and good and bad cholesterol (both ok which was a surprise). Finally, the nurse gave me a percentage risk of cardiovascular disease. The number wasn’t explained and I had to ask if the number quoted was the annual risk of contracting cardiovascular disease (that’s what I had assumed) or something else. However, it turned out to be the total risk over the next decade. The quoted risk was much lower than I would have guessed so I feel emboldened in my lifestyle. The campaign’s efforts to get me to mend my ways backfired.

Of course, I should not take this sort of thing at face value. The nurse was unable to provide me with any pseudo-R2 for the logistic regression or even the Hosmer–Lemeshow statistic for that matter.

I make light of the matter but logistic regression is very much in vogue at the moment. It provides some of the trickiest issues in analysing model quality and any user would be naïve to rely on it as a basis for action without understanding whether it really was explaining any variation in outcome. Issues of stability and predictability (see Rear View tab at the head of this page) get even less attention because of their difficulty. However, issues of model quality and exchangeability do not go away because they are alien to the analysis.

When governments offer statistics such as this, we risk cynicism and disengagement if we ask the public to take them more glibly than we would ourselves.

This is a shocking video. It shows a cyclist wholly disregarding warnings and safety barriers at a railway crossing in the UK. She evaded death, and the possible derailment of the train, by the thinnest of margins imaginable.

In my mind this raises fundamental questions, not only about risk perception, but also about how we can expect individuals to behave in systems not of their own designing. Such systems, of course, include organisations.

I was always intrigued by John Adams’ anthropological taxonomy of attitudes to risk (taken from his 1995 book Risk). 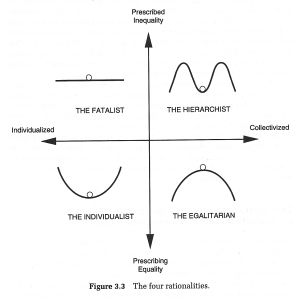 Adams identifies four attitudes to risk found at large. Each is entirely self-consistent within its own terms. The egalitarian believes that human and natural systems inhabit a precarious equilibrium. Any departure from the sensitive balance will propel the system towards catastrophe. However, the individualist believes the converse, that systems are in general self-correcting. Any disturbance away from repose will be self-limiting and the system will adjust itself back to equilibrium. The hierarchist agrees with the individualist up to a point but only so long as any disturbance remains within scientifically drawn limits. Outside that lies catastrophe. The fatalist believes that outcomes are inherently uncontrollable and indifferent to individual ambition. Worrying about outcomes is not the right criterion for deciding behaviour.

Without an opportunity to interview the cyclist it is difficult to analyse what she was up to. Even then, I think that it would be difficult for her recollection to escape distortion by some post hoc and post-traumatic rationalisation. I think Adams provides some key insights but there is a whole ecology of thoughts that might be interacting here.

Was the cyclist a fatalist resigned to the belief that no matter how she behaved on the road injury, should it come, would be capricious and arbitrary? Time and chance happeneth to them all.

Was she an individualist confident that the crossing had been designed with her safety assured and that no mindfulness on her part was essential to its effectiveness? That would be consistent with Adams’ theory of risk homeostasis. Whenever a process is made safer on our behalf, we have a tendency to increase our own risk-taking so that the overall risk is the same as before. Adams cites the example of seatbelts in motor cars leading to more aggressive driving.

Did the cyclist perceive any risk at all? Wagenaar and Groeneweg (International Journal of Man-Machine Studies 1987 27 587) reviewed something like 100 shipping accidents and came to the conclusion that:

Why did the cyclist not trust that the bells, flashing lights and barriers had been provided for her own safety by people who had thought about this a lot? The key word here is “trust” and I have blogged about that elsewhere. I feel that there is an emerging theme of trust in bureaucracy. Engineers are not used to mistrust, other than from accountants. I fear that we sometimes assume too easily that anti-establishment instincts are constrained by the instinct for self preservation.

However we analyse it, the cyclist suffered from a near fatal failure of imagination. Imagination is central to risk management, the richer the spectrum of futures anticipated, the more effectively risk management can be designed into a business system. To the extent that our imagination is limited, we are hostage to our agility in responding to signals in the data. That is what the cyclist discovered when she belatedly spotted the train.

Economist G L S Shackle made this point repeatedly, especially in his last book Imagination and the Nature of Choice (1979). Risk management is about getting better at imagining future scenarios but still being able to spot when an unanticipated scenario has emerged, and being excellent at responding efficiently and timeously. That is the big picture of risk identification and risk awareness.

That then leads to the question of how we manage the risks we can see. A fundamental question for any organisation is what sort of risk takers inhabit their ranks? Risk taking is integral to pursuing an enterprise. Each organisation has its own risk profile. It is critical that individual decision makers are aligned to that. Some will have an instinctive affinity for the corporate philosophy. Others can be aligned through regulation, training and leadership. Some others will not respond to guidance. It is the latter category who must only be placed in positions where the organisation knows that it can benefit from their personal risk appetite.

If you think this an isolated incident and that the cyclist doesn’t work for you, you can see more railway crossing incidents here.